Whether it is to celebrate a winging, homecoming, birthday or even to show off you dedication to your favorite sports team, this fabric banner is fairly simple to make and comes out awesome! 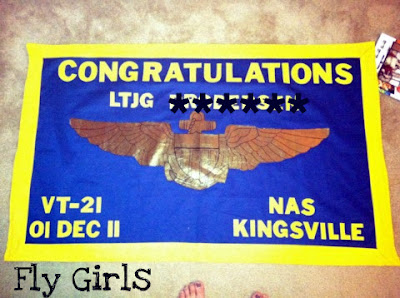 1.       Find a table to work on that is at least as large as the banner so you can lay the entire banner flat without anything slipping off the edge.
2.       Cut the material for the banner (red or blue) to 30”x51” out of twill. Make sure it is wider than 44 inches.
3.       Cut the yellow border material into 2 - 4”x33” strips and 2 - 4”x54” strips. The yellow is called corn yellow at Hobby Lobby.
4.       Sew border strips together.
a.       Place a long strip and a short strip on top of each other.
b.      Sew corner together at a 45° angle leaving about ¾” open on the inside.
Use yellow thread top and bottom.
Fold and crease the corner if you want a line to follow.
I would sew until the tip of the pressure foot reached the edge.
c.       Repeat until all four strips are sewn together.
Make sure all your diagonal corners open the correct way so you end up with a rectangle and not some twisted 3D version of a box.
5.       Fold over the unfinished inside edge of the border and iron a ½” hem all the way around.
Careful and straight cutting of the border strips allows for nice straight lines on the inside of the border. Mine always had a little left unsown on the inside edge of the border corners above the folded and pressed hem. This gave me some fudge factor if I didn’t place my border on the banner perfectly.
6.       Pin border onto banner.
a.       First place the border on the banner right side up, the way you want it to look.
Take some time with this step to make sure the border is equidistant from all edges and laying straight. Usually about 1 ½ inches to 2 inches from the edge is where my border lays.
b.       Fold one edge of the border to the inside of the banner and pin the pressed hem open and onto the banner.
Repeat with all sides. Or pin and sew one edge at a time.
7.       Sew the inside edge of the border to the banner.
Use yellow thread on top and the banner color (blue or red) on bottom if you don’t want to have a yellow box stitched on the back side of the banner and sew along the line you pressed.
If you placed and pinned the border on carefully the inside corners of the borders should line up nicely when folded back on top of the banner.
8.       Fold outside edges of border over the back of banner at 2” from the center and press with iron.
If the heavens have come together for you, your inside edge of the border should be the same distance from the outside of the banner all the way around and this distance should be 2”. If this is the case, just fold the border over the edge of the banner and iron. If not, you’ll have to measure have a straight and equal width border all the way around.
9.       Fold unfinished edge under again, press with iron, and pin to banner.
The corners take a bit of fancy folding to make them line up with the diagonal seam on the front. It’s kind of like folding hospital corners on your bed sheet.
10.   Sew outside edge of banner.
Use yellow thread top and bottom.
If you sew about ½” or so away from the outside edge of the banner you can shove a small wooden dowel rod inside the top edge to hang your perfect banner, perfectly straight.
Assembling The Banner

1.       Iron on the Wonder-Under (sticky paper) to the back side of the yellow fabric. Use an iron on medium heat with no steam. Hold in place for 5-8 seconds in each spot. You may want to do this a few times in each place to make sure it sticks.
2.       Using the letter templates, trace the word CONGRATULATIONS in large letters. When you trace the letters, trace on the paper side and make sure that the colored side of the cardboard is facing up. You will be tracing the letters backwards.
3.       Next you will be tracing the rank, first name and last name. If the number of letters in the rank, first name and last name is between 15-17 letters you can trace using the big letters. If the number of letters is more than 17, you will have to use the smaller letters.  Below is an example of how to abbreviate the ranks.
Marines: 1STLT JOHN DOE Navy: LTJG JOHN DOE
4.       Next you will be using the smaller letters to trace the winging date, VT-21, and NAS KINGSVILLE. (Military dates are typically written day, month, year. The month uses only a three letter abbreviation, so for example the September winging the date appeared on the banners as: 02 SEP 11) The date, VT-21 and NAS KINGSVILLE go in the bottom corners of the banners.
5.       Once you have traced all of your letters, leave the paper on the material and cut out the letters. DO NOT TAKE OFF THE PAPER YET!
6.       Take the gold wings you were given and cut them out leaving about a one inch border around the wings. Cut out a piece of the Wonder Under (sticky paper) that is the exact same size and shape as the wings.
7.       This next step must be done VERY CAREFULLY. Place a sheet or pillowcase down on a hard surface. Place the wings gold side down, onto sheet or pillowcase. Place the sticky paper on top of the wings with the rough side of the paper touching the back of the wings. Using an iron on low to medium heat, iron the sticky paper to the wings. If you think you might melt the wings then place another pillow case on top of the paper side of the sticky paper. Getting the paper to adhere to the wings takes awhile.
8.       Once the paper is stuck to the wings, cut the wings out around the black border.
9.       If you are using a table as your work surface be sure to cover it with a towel or sheet for the next step.  Lay your banner out and place the lettering onto your banner. Be sure you have even spacing from the sides and that the lines are going straight. Once you see that everything is going to fit ok you can begin ironing everything on.  DO NOT take the paper off of the letters until you are ready to iron that particular letter on. It works well to iron CONGRATULATIONS on first and start with the middle letters and work out.
10.    When you peel the paper off of the letter you should feel rough stuff on the back of the letter. If notice the roughness is still on the paper just go over the letter/paper with an iron again.
11.    Iron your wings onto your banner last. Peel the paper off of the wings and situate them where you want them on the banner. Place a towel or pillowcase over the wings so you don’t melt the material. Using medium heat iron the wings on. This process could take 10 or more minutes. Check to see if they are sticking as you go.
12.    Once you have ironed on the wings and the letters your banner is complete!!